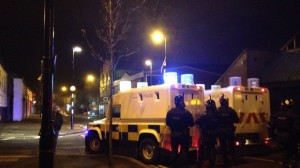 DETECTIVES on Monday are studying video footage to try and identify masked youths behind a riot in south Belfast on St Patrick’s Day.

One police officer was injured during trouble which the PSNI has linked to the loyalist flag protests in south Belfast.

A group of masked youths blocked the Donegall Road, near Sandy Row, and attacked police with bricks and bottles.

Protesters burned bins on the road and carried out “sustained attacks on police”, said the PSNI.

One man was arrested and taken into custody.

A police officer in riot gear sustained minor injuries during the street disorder.

Fire crews were called out to deal with the situation and police maintained a police presence in the area until late on Sunday night.

A police spokesperson said: “Following a robust policing operation calm was restored to the area at around ten o’clock.

“Detectives from the Operation Dulcet Team have been clear from the outset that there will be consequences for individuals who engage in illegal activity.

“The PSNI have, and will, continue to make people amenable to the courts and will be carrying out further enquiries to identify those involved in the disorder.”

The 18-year-old who was arrested has since been released pending a report to the Public Prosecution Service (PPS).