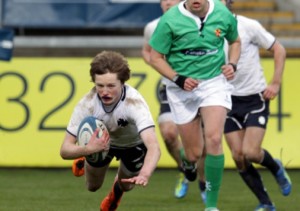 RBAI put up a brave fight in the 2013 Schools Cup rugby at Ravenhill on Monday.

INST took the lead with an early score from captain from Joshua Aktinson but their game plan was disrupted when they lost the flanker to injury.

Josh Bingham levelled the scores when he showed his power and pace to go over from close range but he missed the conversion and was also off target wityh a drop goal so the sides were level at 5-5 at half time.

Conor Kelly gave Methody the lead nine minutes into the second half from a slick backs move when Rudi Benade open3ed up the defence before offloading to his wing colleague.