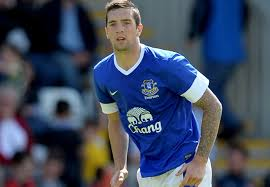 A Premiership footballer from Northern Ireland is at the centre of controversy after a message appeared on his Twitter account in support of the IRA.

But Everton defender Shane Duffy has denied responsibility for the message saying someone took his phone and retweeted the message without his knowledge.

The message appeared on the Republic of Ireland international’s account during the earlier hours of Monday.

He later apologised for any offence caused and tweeted: “cant leave ur phone anywhere now!!” (sic).

Merseyside Police have now been asked to investigate the Twitter message which read: Yeeessss. Up the ‘Ra!”

“I and others affected by IRA violence need answers.”

He tweeted: “Keep your chin up Shane. And lock your phone!”

In February 2010, he switched his international allegiance to the Republic of Ireland.

The footballer has more than 48,000 followers on the micro-blogging site. 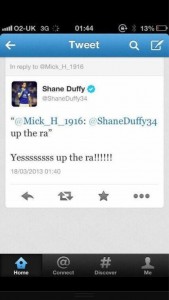 Later on Monday morning, Duffy reiterated his denials and said he was getting “abuse” from many Twitter users for something he did not do.

He posted: “The retweets and tweets was not me. Got to accept the hate. Really am sorry for this mess! Sorry guys!”

Everton FC has not yet made a comment on the matter.


One Response to EVERTON PLAYER IN ‘IRA ROW’ ON TWITTER