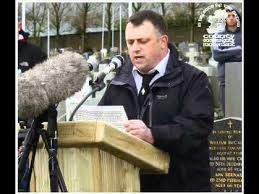 A LEADING dissident republian has faced a court with two other men over and Easter commemoration in Derry/Londonderry last year.

Garry Donnelly was among three men charged in connection with an annual dissident republican Easter commemoration in the City Cemetery.

Donnelly, 42, of Iniscarn Road, 50-year-old Anthony Michael Lancaster, of Circular Road and 27-year-old Ciaran Anthony Boyle, of The Meadows, are jointly charged with assisting in arranging a meeting addressed by a member of a proscribed organisation.

The charge relates to an Easter commemoration on April 9 last year.

Bail was not opposed by the PSNI or Public Prosecution Service.

The trio were released on their own bail of £900 with one surety of £900 to appear in court again on April 25.

As part of their bail they were banned from attending, organising, participating or assisting any meeting, protest or event organised by the 32CSM or any group claiming to represent the IRA or any illegal grouping.

They must also sign bail twice on Easter Monday.