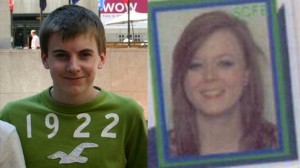 THE PSNI have appealed for the public’s help in tracing a young man and woman missing from the Republic of Ireland.

Kieran McKeon, 18, was last seen in Derry city centre in the early hours of Thursday.

He is described as being approximately 5ft 6″ tall, of slim build, with long brown hair covering his face.

A police spokesperson said: “It is believed he was last seen wearing a dark hooded top and grey tracksuit bottoms.”

On Thursday, the PSNI issued an appeal over a missing “vulnerable” woman last seen at a Dublin hospital the previous day.

Police suspect that Alexandra O’Brien, 21, may have travelled to Derry.

Alexandra is described as being around 5ft 6″ tall and has shoulder length light brown hair.

She was last seen wearing a blue and white striped t-shirt and grey tracksuit bottoms.