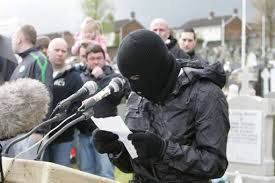 A THIRD man has been arrested by police investigating terrorism offences at the Easter commemoration at the city cemetery in Derry/Londonderry last April.

The man was arrested on Wednesday evening by detectives from the PSNI’s Serious Crime Branch.

He was taken to Antrim Serious Crime Suite for questioning.

It follows the earlier arrest of two other men on Wednesday in relation to the incident on Wednesday.

All three men remain in custody.