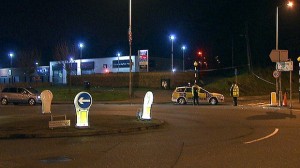 A MAN has been remanded in custody accused of having explosives and making a series of hoax bomb Calls.

Robert Colgan was charged by a team of detectives set up to investigate offences linked to the ongoing flag protests.

The 24-year-old, of Mournebeg Drive, Newtownabbey, is alleged to have had a blast bomb in suspicious circumstances.

The charge relates to the discovery of an explosive device in the Doagh Road area of Newtownabbey on 4 March.

Belfast Magistrates Court heard that Colgan was not caught in possession of the blasts bomb.

However, a detective said he Colgan was linked to the device by mobile phone analysis.

In one incident on Friday, February 16, two hoax alerts were made about devices being left at Cloughfern Corner in Newtownabbey.

All of the locations for the alleged false alarms were in the Newtownabbey area.

A further charge of assault on police was put to him as he appeared before Belfast Magistrates’ Court.

A detective said he could connect Colgan with the alleged offences.

No bail application was made during the brief hearing.