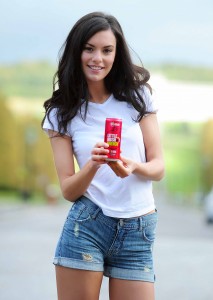 NORTHERN Ireland’s very own healthy energy drink Little Big Shot has been named as one of the Top Five Most Interesting Products.

It stood from a crowd of over 80,000 products on display at this year’s Winter Fancy Food Show in San Francisco.

The speciality food and beverages show is the largest of its kind on the West Coast of America and this year’s event was the biggest in its 38-year history with products from over 35 countries on display.

Each year a panel of trend-spotters comb the exhibition halls to identify what will be hot for the year ahead.

And the MJR Creative Group listed Little Big Shot as one of the Top Five Most Interesting Products saying it stood out in what is a crowded category and had a strong distinction point.

“Capitalising on the growing concern about the side effects of high caffeine energy drinks, Little Big Shot comes to the market with a caffeine-free and guarana-free energy drink,” said the MJR Creative Group.

“Getting its kick from fructose and ginseng, it sidesteps growing regulatory action in the category. We like its light carbonation and superior flavour, as well as the friendly and enthusiastic representatives. We also like that the company hails from Belfast.”

The product, which is the brainchild of Big Shot NI managing director Bert Jukes, was developed over a period of four years in consultation with food scientist Professor Donald Muir and is a 100% natural blend of berry fruit juices including raspberries, blackcurrants, cranberries and pomegranates, combined with ginseng, hibiscus and B vitamins.

It also contains a unique natural ingredient called Deep Ocean Water which provides essential nutrients required by the human body for the regulation of physical functions and health.

In addition, the fact that Little Big Shot is caffeine free and contains no taurine or guarana has made it a popular choice not just amongst people leading a healthy active lifestyle but also for children and pregnant women for whom many other energy drinks are not recommended.

Big Shot NI managing director Bert Jukes is delighted that the healthy energy drink was recognised at the show.

“With more than 80,000 products on display at the show I am absolutely delighted that Little Big Shot stood out from the crowd as one of the top five most interesting products,” said Bert.

“The fact that it is made from 100% natural berry juices along with Deep Ocean Water and is free of taurine, caffeine and guarana gives us a real unique selling point.

“We first launched the product in Northern Ireland in 2011 with the aim of providing a healthy alternative to the energy drinks that were available in the marketplace and since then Little Big Shot has gained widespread distribution and interest from all over the world,” he said.

“The Winter Fancy Food Show is a fantastic event with over 17,000 people attending over three days. There was a lot of interest in Little Big Shot and we hope the show helps us to develop further sales across the US for the product,” he concluded.

“This is a tremendously encouraging development for one of the companies taking part in our Northern Ireland Naturally pavilion at Winter Fancy Food,” said Mr McBride.

“The recognition is a massive boost for the company as it works to expand sales especially in the huge US marketplace.

“In addition, the recognition is great news for food and drink in Northern Ireland because it highlights the innovation and new product development underpinning an industry now contributing over £4 billion annually to the local economy.

!We are delighted that a company that we have encouraged and assisted is now making such a significant impact in the US.”

Little Big Shot is suitable for anyone who is leading an active lifestyle including sportspeople, pregnant women, vegetarians and even children over the age of eight.

It is carbonated and canned with natural spring water, contains no caffeine, taurine, preservatives or E numbers, and has no artificial colourings or flavourings. The product is available in all good retail stores.

The other four in the Top Five Most Interesting Products category include: