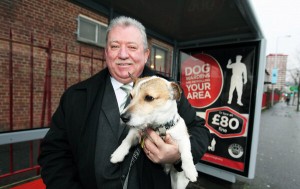 SDLP councillor Pat McCarthy with his dog Jack at the counci’s Your Dog, Your Job campaign launch last month

BELFAST City Council is continuing its crackdown on dog fouling with the campaign now targeting the north of the city.

It follows on from the very successful launch of the `Your dog, your job` campaign in west Belfast last month which received positive feedback from local residents.

It resulted in a reduction of dog litter in the area by just over a quarter atn 26 per cent.

And 14 stray dogs were seized and action is now being taken against nine owners who failed to have a licence for their dog.

They will also have to pay an £80 fine for allowing their dog to stray.

Councillor Pat McCarthy, chairman of the council`s Health and Environmental Services Committee, said: “We knew before we started this campaign that straying dogs accounted for part of the problem but when we think of stray dogs we think of dogs that have no owners.

“The experience of the dog warden team in the west of the city is that owners are letting their dogs out, unaccompanied, to roam the streets and do their business wherever they like.

“This is totally unacceptable and is contributing to the problem of dog fouling on our streets.”

The message of the campaign is that dog owners are responsible for cleaning up after their pet and, if they fail to do so, they`ll be given an £80 fine.

Councillor McCarthy said he hoped the campaign would be as well-received in north Belfast as it had been in west.

He added: “People are fed up with dogs fouling on our streets and are frustrated that some dog owners still think it`s ok not to clean up after their pet.

“There is no excuse for not cleaning up after your dog – not only is it unsightly and inconvenient, there are also health risks associated with dog faeces which can be harmful to people, especially children.

“You don`t need a special bag or a special bin; we all have plastic bags at home so pop a couple in your pocket when you`re out with the dog and there are hundreds of litter bins dotted around the city on streets or in parks, and you can use any one of them.

“The message to people in the north Belfast area is that our dog wardens will cracking down on irresponsible dog owners, and if you`re out and about and you`re caught not cleaning up after your dog, you face an £80 fine.”For more information about the anti-dog fouling campaign visit www.belfastcity.gov.uk/dogfouling

Members of the public can report dog fouling in their area by calling 028 9027 0431 or email dogwardens@belfastcity.gov.uk