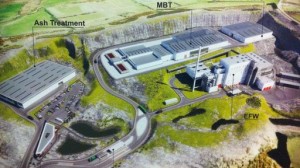 THIS is the artist’s impression of what an incinerator to deal with waste from 11 council areas in Northern Ireland would look like.

But already Sinn Fein are opposed to the citing of the incinerator on pollution grounds.

The scheme could see an incinerator and waste facility built near Mallusk in County Antrim to recycle waste from black wheelie bins.

Arc21 said it intended to develop the “energy from waste” facility at the Hightown Quarry on the Boghill Rd.

If planning is approved, the £240m investment would be one of the biggest, single infrastructure schemes ever undertaken in Northern Ireland.

The plant could create 340 jobs and generate enough power for 30,000 homes.

A public consultation on the waste facility plan is due to begin shortly.

However, North Belfast MLA Gerry Kelly said his party was totally opposed to the Mallusk site.

“We will fight this plan to build a vast incinerator in Mallusk as the air pollution would end up in Belfast,” said the Sinn Fein MLA.

Those behind the proposed plant it said it would help Northern Ireland to meet EU targets on landfill diversion and avoid hefty fines.

Arc21 is an umbrella group for waste management by 11 councils in the east of Northern Ireland.

It said the proposed waste facility would be run to stringent EU guidelines on emissions.

The planned development will also include an adjoining “mechanical biological treatment” plant.

It will sort recyclables and then treat the remaining waste to make it more combustible.