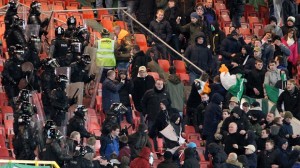 For a second week in a row, the clash between Linfield and Shamrock Rovers has ended in trouble.

On Monday night, it was the turn of Rovers’ fans to disgrace their club.

It is understood some Rovers fans broke through barriers in the top deck of the North Stand and made their way towards Linfield fans.

Police brought the situation under control however both sets of supporters were heard goading each other throughout the game.

It is understood a number of seats were ripped up and thrown onto the field from the North Stand end.

A flare was also thrown causing the game to be stopped briefly.

“I’m disgusted that some Shamrock Rovers fans came to Belfast tonight to engage in sectarian chanting and violence. It has no place in sport,” said the MLA who sits on the Policing Board.

Following the match, fans said there was a “face off” between police and supporters in Tates Avenue, south Belfast.