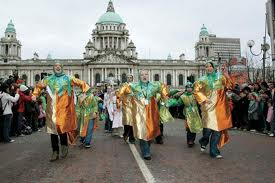 • Dickens at the Ulster Hall, Lyric Theatre, Belfast, March 19. Director Sam McCready recreates an afternoon when the great novelist, Charles Dickens, meets an appreciative Ulster audience in the newly-opened Ulster Hall, sharing amusing observations on Belfast and its people, interwoven with extracts from his best-known novels and moving stories from a tumultuous life.

• Music Skills NI, North West Regional College, Co. Londonderry, March 20 – 21. During this two day event, students will compete in categories including live performances, live electronics, DJing, sound design and song-writing. Make sure you come along to see the recording and performing artists of the future.

• Belfast 400, various locations, Belfast, various dates. In 2013, Belfast is marking the 400th anniversary of the 1613 charter which granted Belfast its town status. To celebrate the city council will be marking this significant anniversary with a number of events and initiatives.

• Opera NI presents The Bear, Theatre at the Mill, Newtownabbey, Co. Antrim, March 21. Death, infidelity, a duel and passionate love – William Walton’s ‘extravaganza in one act’ has it all in the tale of Madame Popova, an attractive young widow, and Smirnov, one of her late husband’s creditors. A witty and heart-warming story.

• Grease & Dirty Dancing Show, The Market Place Theatre, Co. Armagh, March 21. Performed by leading singers and dancers from London’s West End and supported by a sensational live band this production will bring you all the songs from these two hit movies.

• Blood Brothers, Ardhowen Theatre, Enniskillen, Co. Fermanagh, March 22. The story of fraternal twins who were separated at birth because their mother decided to have one of them adopted. Their different backgrounds take them to opposite ends of the social spectrum, one becoming an Oxbridge-graduated councillor and the other unemployed and in prison. The play looks at the differences and conflicts of their upbringing, their relationships with one another and with their real and adopted mothers as well as the girl they both ultimately fall in love with.

• Baby Rave – Big Beats for your Baby, Warrenpoint Town Hall, Co. Down, March 28. Baby Rave is a unique dance and music event for children under 4 years old and their parents. Boogie with your baby to specially selected music in an ambient ‘club’ environment which will be dressed up with soft materials and sensory toys.