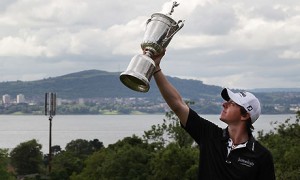 THE golf club where Rory McIlroy learned his World No 1 craft has been targeted by robbers.

Three men, one of whom was armed with a suspected handgun, entered Holywood Golf Club on the Demesne Road area shortly after 10pm on Sunday and threatened staff.

They demanded money before making off empty-handed from the Co Down club empty handed.

Two staff members, a man and a woman, were not harmed in the incident.