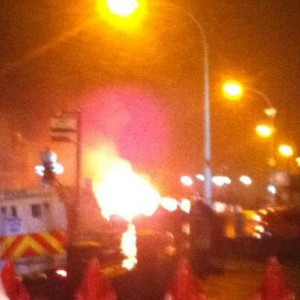 FIVE police officers have been injured during “serious disorder” in Newtownabbey on Friday night, say the PSNI.

The police say that up to 100 people attacked police with bricks and bottles during the incident on the Carnmoney Road.

It is claimed loyalists tried to remove a number of Irish Tricolour flags which had been erected in the Glengormley area ahead of Easter marches.

At one point a car was hijacked and set on fire and a house was damaged.

One of the injured police officers required hospital treatment.

The police say the area is now calm and Tactical Support Group (TSG) officers are maintaining a presence in the area. 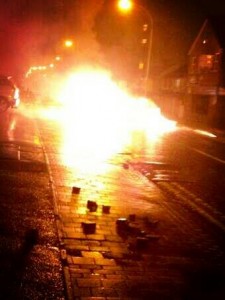 A car on fire in Newtownabbey on Friday night


One Response to BREAKING NEWS….POLICE ATTACKED DURING RIOTING IN NEWTOWNABBEY