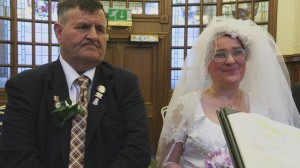 THEY are three of the biggest things in life – birth, marriage and death.

`Love & Death in City Hall`, a new film for BBC Northern Ireland, follows the experiences of some Belfast people as they deal with these highs and lows of life.

Located largely in the Registrar`s Office of Belfast City Hall, the film is on BBC One Northern Ireland on Monday March 18th, at 9pm.

It follows seven stories from the moments of registration to their natural conclusion, interspersed with reflections from register office staff.

Billy Coulter and Carol Smith come to City Hall to tie the knot. For Billy it`s second time around.

Reflecting on the past and looking to the future on his way to marry Carol in a civil ceremony at City Hall, Billy says: “This is my second time around. I am a glutton for punishment! When you get old you need somebody to look after you. You just can`t turn the clocks back any more.”

Registrar Peggy Smith shares the story of her son Christopher who died and how since his death she has found little feathers in unusual places which help her, in a small way, to stay connected with him.

One of the most surprising stories features George and his son Alastair, who come to register George`s second marriage to Amanda. As father and son, their relationship is closer than many and as they make the wedding cake together viewers will come to understand why.

Guy King, the film`s producer and director, said: “Have you ever wondered how strange is it that we register life`s happiest and saddest events in the same register office? It is literally the circle of life in one room. The stories unfold in the wooden booths in which the public meet with the registrars.

“The film reminds us that life`s most poignant stories pass us on every street, and they`re also around the next corner in our own lives. In this sense, the magic of the film is that it explores the extraordinary in the ordinary.”