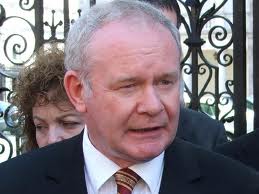 SINN Fein chief Martin McGuinness has been warned by police that he is under threat of death from dissident republicans in his home city.

The threat by a grouping calling itself the ‘New IRA’ followed the deputy first minister’s condemnation of the dissidents who tried but failed to attack a police station in Derry/Londonderry on Sunday night.

Two men were remanded in custody on Wednesday over the deadly mortar bomb find following a covert surveillance operation.

Mr McGuinness said on Thursday he has been warned by police that he is facing a death threat from dissident republicans in the city.

He was visited at his home by a senior PSNI officer on Wednesday night to inform him of what has been described as a “real and active” threat on his life.

Mr McGuinness said it may be linked to his condemnation of an attempted dissident mortar bomb attack in Derry, which was foiled by police earlier this week.

“Both myself and the PSNI are taking this threat seriously,” Mr McGuinness said.

“However there are times when in political leadership staying silent is not an option and I will not be silenced by threats like this. I will defend the peace process from attack from whatever quarter, be it these groups or the loyalist flag protesters over recent months.

“It says much about the mentality of those running groups like the one behind the threat that in their warped logic threatening Irish Republicans and their families somehow advances the cause of Irish reunification.

“I am very sure of the ground I stand on. I am also very sure that it is the path shared by Republicans across this island genuinely interested in building a new agreed Ireland, Republicans who put Ireland before ego, criminality and self gain.”

It is not the first time the former Mid Ulster MP has been warned by the PSNI of a death threat against him.

The death threat to the deputy first minister came hours after an SDLP MLA Conall McDevitt received a bullet in the post.

The threat was condemned by politicians and also the Policing Board of which he is a member.

At the height of the Union flag protests, bullets were intercepted in the post at Stormont buildings.


One Response to YOU ARE A DEAD MAN WALKING MARTY, DISSIDENTS TELL SINN FEIN CHIEF MCGUINNESS