TWO LINFIELD FANS ARRESTED AFTER CLASHES WITH GARDAI IN DUBLIN 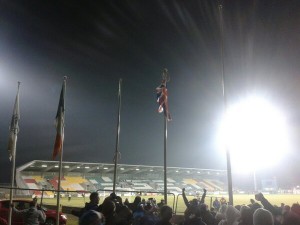 TWO Linfield football fans spent the night in custody in Dublin after trouble flared at their Setanta Cup tie with Shamrock Rovers.

It was a disappointing result on the pitch when Linfield went down 4-1, leaving manager David Jeffrey to vent his frustration over defensive errors.

But while the players let them down with footballing mistakes on the pitch, a small number of travelling Linfield fans let the club down badly off the pitch.

A mounted Garda officer was thrown from his horse outside the stadium.

The Gard was taken to nearby Tallaght Hospital for an examination but his injuries at not believed to be serious.

The violence flared after a section of Linfield supporters managed to run a Union flag up a flag pole inside the ground.

Witnesses said a pocket of the Belfast club’s fans clashed with gardai and security as they waited to go home.

However, Linfield supporter said they saw some Shamrock Rovers fans being arrested by Gardai.

Shamrock Rovers supporters had to be cleared from the pitch after a goal from Ciaran Kilduff.

There were also reports of sectarian chanting from both sets of fans throughout the game, which Linfield lost 4-1.

It was the first meeting between Rovers and Linfield since a 1984 European Cup tie.

The teams meet again next Monday at Windsor Park in a clash which is expected to be accompanied by a heavy security operation.