EXCLUSIVE: THIS is the Northern Ireland man and one-time IRA bomber who Italian police have linked to an operation against a Mafia money laundering racket.

Harry Fitzimsons, who is originally from the Andersonstown area of west Belfast, was said to have been among 20 people detained by Carabineri on Tuesday morning.

However, on Tuesday night, a solicitor for Harry Fitzsimons denied reports that his client was arrested in Italy.

Earlier Italian police named him as a suspect, saying he had a convicted for an IRA bombing offence.

The solicitor said Mr Fitzsimmons has not at any time been contacted by police in either Italy or Northern Ireland.

Dan McGuinness, the solicitor stated: “Mr Fitzsimmons totally refutes the allegations being made against him which are unfounded.

“He has not at any time been contacted by the police in either Italy or Northern Ireland and has been carrying out a legitimate business as a promoter of properties in south Italy.”

The suspects were arrested as part of ‘Operation Metropolis’ and assets worth 450 million of Euros (£390m) were seized during anti-mafia raids.

As well as cash, investigators seized companies and holiday villages, the police say.

Born in 1949, Harry Fitzimons is said to have spent “35 years in social housing in Belfast”, according a profile on him.

In the early 1970s, he was convicted of a bombing offence in Belfast.

“I met Antonio three years ago, when we first discussed going into business together,” he says on a Bebo social network page. 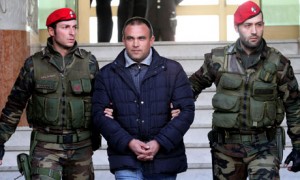 Tuesday’s raids were prompted by investigations begun in 2008 and centre on the ‘Ndrangheta crime network and its activities in tourism.

Italian media reports say that Spaniards were among those arrested, as well as one person suspected of having links to the IRA.

The raids were made early on Tuesday morning.

Those arrested were being held on suspicion of offences including mafia activity and re-investment of illicit assets.

The police say their investigations revealed “an extensive and complex network of Italian and foreign companies” which enabled crime gangs to become involved in the ownership and development of “dozens” of real estate ventures and tourist resorts.

Some of the resorts were located in the coastal areas of the Calabria region – renowned for their beauty.

The businesses had forged links between the families of the ‘Ndrangheta and “important Spanish entrepreneurs”, the police say.