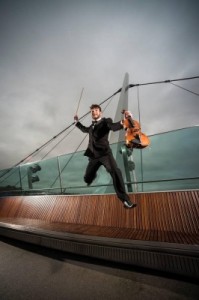 YOUNG musicians and dancers from County Londonderry are the stars of the Northern Ireland Tourist Board’s (NITB) Spring advertising campaign.

It will promote short breaks in Northern Ireland featuring a number of cities and key visitor attractions.

The TV campaign, which aired on January 28 and continues until March 31, focuses on the Derry/Londonderry UK City of Culture celebrations as a key highlight.

It features a young ballerina, string quartet, Serenity, and a drama and circus school from the Maiden City, alongside Co. Londonderry musician Shauna Tohill from Silhouette.

NITB engaged local people in the campaign to reflect the great young talent in Derry~Londonderry, the strong offering from the City and the legacy of the City of Culture year.

Eimear Callaghan, Campaigns Marketing Officer of NITB said, “Our Spring campaign focuses very much on events and attractions in 2013 and with the City of Culture being a key highlight, we wanted to film in Derry~Londonderry and capture the essence of the celebrations against the backdrop of the Walled City.

“We have some fantastic footage of entertainers in Guildhall Square, a string quartet and a ballerina on the Walls and flame dancers in Ebrington.

“We chose these groups and individuals as we were trying to create and visualise what the City of Culture will look like and encourage people to visit in a momentous year,” Eimear added.

Young ballerina Zoe Kyte is one of those who feature in the TV ad. The thirteen year old attends dance classes in Derry and has high hopes for a future in performing arts, illustrating the potential legacy of the City of Culture.

Waterside-based drama and circus school In Your Space also star in the advertisement, and their flame dancers and fire throwers bring vibrancy and colour to the campaign.

The soundtrack is once again the very memorable ‘Can’t Keep Up’ by Magherafelt band Silhouette which was used in the ni2012 campaign but for 2013, a new edited version has been produced.

Shauna Tohill, singer/songwriter with Silhouette who penned the song, is honoured to be part of the City of Culture celebrations in such an historic year for her home county.

“I’m delighted that Can’t Keep Up has been used again to promote Northern Ireland and in particular Derry~Londonderry in such an exciting year with the City of Culture celebrations,” said Shauna.

“The song aims to illustrate the vibrancy of all that 2013 will bring to Northern Ireland with fantastic events such as The Return of Colmcille, Fleadh Cheoil, Lumiere and the Turner Prize,” she added.

For information on short breaks in Northern Ireland and events in 2013, or for further information on Derry~Londonderry City of Culture 2013, visit www.discovernorthernireland.com