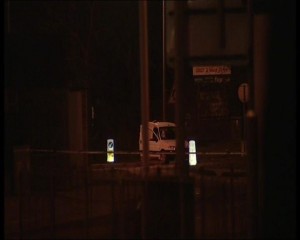 Four live and primed mortars were uncovered and three men arrested after police stopped a van bearing Republic of Ireland number plates as it headed into the city centre on Sunday night from the direction of Letterkenny, Co Donegal.

A motorbike, which police believe was the ‘scout’ vehicle for the attack, was also stopped as it drove behind the van.

The motorcyclist was arrested along with the driver of the white van.

On board the van, the PSNI discovered four live lethal mortar devices inside metal tubing welded to the floor of the van.

The roof of the van had been removed in preparation for the attack.

Police believe the intended target of the attack was Strand Road PSNI station.

PSNI Chief Supt Stephen Cargin said on Monday morning that four mortar bombs were found in the van and the bombers plan was to “kill and cause casualties”.

“This was reckless. We would have had mass police casualties. I have no doubt if we had not intercepted these devices we would have been dealing with mass casualties.

“The roof had been cut out to leave a hole in the roof to allow the mortars to be fired and hit its target, a police station.

“These devices could have detonated on route to their target at any time. So the people behind this didn’t care that they were taking live mortars through a built up area of the city.

“This is a worrying development. Dissident republicans want to take us back to the past where nobody wants to go.  They have nothing to offer the community.

The deadly discovery followed a lengthy surveillance operation against dissident republicans in the Maiden City by MI5, the Army’s Special Reconaissance Regiment and the PSNI’s ‘C3’ Rural North Intelligence Branch.

In a follow-up operation, a 37-year-old was arrested at a house during the planned operation.

Several hundred people had bee evacuated from around 100 homes within the vicinity of the mortar bomb-laden van.

At one point during the evacuation, a crowd gathered and a petrol bomb was thrown at a police car but no damage was caused.

A fleet of ambulances rushed to the scene to help move a number of people with disabilities from their homes to safety.

Army bomb disposal experts were called to the Letterkenny Road area of Londonderry after the devices were discovered.The security is expected to stay in play until lunchtime until the devices are made safe.

A PSNI spokesman said: “Police are currently dealing with a security alert in the Letterkenny Road area of Londonderry, following the discovery of a suspicious object in a vehicle.

“Approximately 100 homes have been evacuated and army technical officers are at the scene.

“Detectives from PSNI serious crime branch are dealing with the incident and are linking it with dissident republican activity.”

SDLP MLA Pat Ramsey said: “This discovery of a possible viable device by PSNI this evening reminds us of those who would recklessly endanger the lives of people in this community.

“I cannot state it any stronger; I want to make it clear that the people of Derry do not want this and those behind it need to stop.

“I am calling on anyone with information to come forward and assist police with their ongoing investigations in regards to recent attacks on our community.”

Mr Ramsey said those responsible “are bringing nothing but distress and disruption to the people of this city”.