A MAN accused of murdering two soldiers at Massereene Barracks has gone on trial again.

Brian Shivers is charged with killing Sappers Mark Quinsey and Patrick Azimkar at the Co Antrim army base in March 2009.

The soldiers – 23-year-old Quinsey and 21-year-old Azimkar – were gunned down by the Real IRA as they collected pizza at the gates of Massereene just hours before they were due to be deployed to Afghanistan. 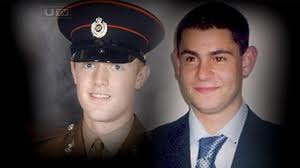 A total of 65 bullets were fired at the “defenceless” soldiers who were targeted individually.

The gunmen casually reloaded and continued to fire at the helpless victims as they lay on the ground.

This, the prosecution said, was an attempt at mass murder.

The prosecution allege that Shivers’ DNA was found in the getaway car, a Vauxhall Cavalier.

It was to have been burned out following the attack but a fire failed to ignite inside because of a lack of oxygen.