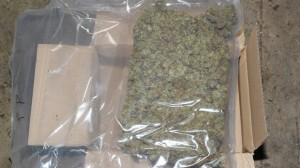 DETECTIVES have charged a man over the discovery of £100,000 worth of cannabis in Bessbrook, Co Armagh.

The 25-year-old was detained on suspicion of possessing Class B drugs and intent to supply.

Drugs were recovered following a planned raid of a house in the Barron’s Hill area on Friday.

A sum of money and other drug-related paraphernalia was also seized from the property.

He is due to appear in court on Tuesday.