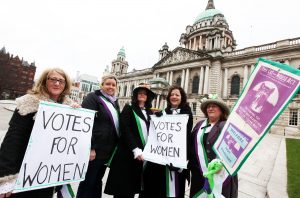 BELFAST is to join in the global celebration of International Women`s Day on Friday March 8.

A rally will leave the University of Ulster`s Belfast campus at 12.30pm, to march to the City Hall, where it will be welcomed by the Lord Mayor, Alderman Gavin Robinson.

Some of the women taking part in the rally will be dressed as suffragettes, to mark the rise of the women`s suffrage movement a century ago.

Speaking ahead of this week’s rally, Lord Mayor Robinson said: “The role of women in the period between 1912 and 1922 cannot be under-estimated, especially as the campaign for female suffrage – which brought together women from all social, economic, political and religious backgrounds to fight for a common goal – played such a pivotal role in developing the society we enjoy today.

“It is only right and proper that we all, men and women alike, recognise and remember the importance of the sacrifices made by women of 100 years ago.”

Earlier in the day, a blue plaque was unveiled by the Ulster History Circle at former home, on Botanic Avenue, of the renowned suffragist Isabella Tod.

The council also will be holding a special breakfast event for its own female staff, addressed by a number of leading women from local business and academia.

The Ulster Hall is also holding a series of events throughout the day, including writing, photography and drumming workshops, a `Sofa Session` with singer Tracy Dempsey, a special meeting of the Bedford Street Book Club and a lecture by Dr Olwen Purdue of Queen`s University Belfast.

Details of other events being organised by Belfast City Council to mark the centenary of the rise of the women`s suffrage movement can be found by visiting www.belfastcity.gov.uk/centenaries