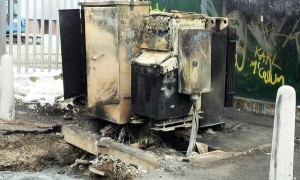 Vandals caused up to £100,000 worth of damage to Carrick sub station

THUGS set fire to an electricity substation in Carrickfergus on Friday night leaving 3,000 homes without power.

And Northern Ireland Ireland Electricity said those behind the vandalism were lucky they were not killed in the wanton destruction.

NIE engineers worked through the night to restore power to the affected homes.

Randal Gilbert from NIE said interfering with high voltage electricity could be lethal.

“We cannot stress strongly enough how dangerous it is to tamper with electricity substations,” he said.

“These vandals were lucky to make it out with their lives. As it is, they caused considerable inconvenience to the local community and local businesses.

“We regret the inconvenience experienced by customers as a result of this deliberate act and will continue to work with the PSNI to identify those responsible.”

Mr Gilbert said they were building a replacement substation and salvaging and repairing the network around the vandalised substation.

He said the work would continue throughout the weekend.

Local UUP MLA Roy Beggs condemned those behind the attack and urged anyone with information to contact the PSNI on 0845 600 8000.