The 23-year-old faces six offences as he appeared in the dock of Belfast Magistrates Court.

During a court hearing, Bryson was remanded into custody to reappear via videolink later this month.

District Judge Bernadatte Kelly told Bryson, of Rosepark, Donaghadee, Co Down, that she shared police concerns that if released he would pose a “flight risk”.

Instead, Bryson posted a video on YouTube on Wednesday, accusing the PSNI of “political policing”. He finished the video saying: “No Surrender!”

However, Bryson was arrested on Thursday in Bangor by officers from Operation Dulcet, the PSNI taskforce set up to investigate the disorder surrounding the Union flag protests. 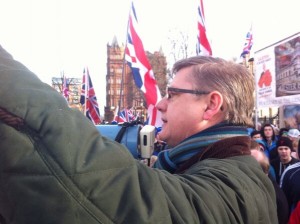 Jim Dowson appears in court on Saturday and bailed

The Scottish-born 48-year-old, from Burn Road in Comber, Co Down is charged with one count of encouraging or assisting offences and five counts of taking part in an unnotified procession.