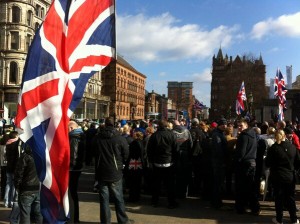 They called for the release of Ulster People’s Forum founders Willie Frazer and Jamie Bryson.

It is understood that loyalists travelled over from Scotland and Liverpool for Friday’s protest.

Police in riot gear had at lunchtime prevented flag protestors from leaving in a large group.

The police have now moved the group from outside the City Hall.

The PSNI had earlier asked motorists to avoid the area around Belfast City Hall because of severe traffic disruption in the area.

The protestors have now been moved on and traffic has now returned to normal.

Willie Frazer, 52, was remanded in custody on Friday accused of five offences, including one of possessing a stun gun. 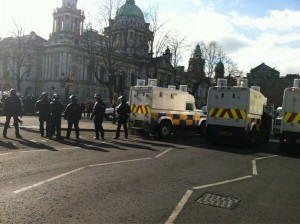 It is understood social network sites have called for loyalists to take to the streets on Friday evening for further Union flag protests.

A source said: “There is no more talk of peace after Willie Frazer was remanded in custody.

“People on the social network sites believe this is another form of internment.

“The PSNI can expect to have a busy Friday night.”