Police confirmed a 23-year-old man had been charged by detectives from the ‘Operation Dulcet’ inquiry team on Friday.

‘Operation Dulcet’, headed up by Detective Supt Sean Wright, was set up to probe Union flag protests over the past 11 weeks.

Bryson, of Donaghadee, Co Down, is accused of two counts of encouraging or assisting offences under the Serious Crime Act and four counts of taking part in an un-notified public procession.

Mr Bryson was arrested on Thursday on suspicion of public order offences relating to the protests and was being held in police custody.

Police officers from Operation Dulcet carried out searches on Mr Bryson’s Donaghadee home and in the nearby Kilcooley Estate as they attempted to track him down.

The taskforce is investigating offences linked to loyalist demonstrations that have been ongoing since December, in response to a council vote to reduce the number of days that the Union flag flies at City Hall.

Mr Bryson was detained on the same day when another loyalist campaigner Willie Frazer was charged by with public order offences. 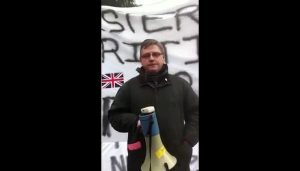 Mr Frazer appeared in court on Friday where he was remanded in custody to appear again in four weeks time.

The 52-year-old from Markethill was also charged with having a stun gun.

He is being questioned about organising street protests over the Union flag row.