DOWN IN THE MOUTH RORY WALKS OUT ON HONDA CLASSIC 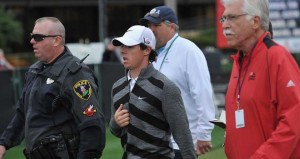 BELOW par Rory McIlroy stormed out of the Honda Classic in Florida with toothache on Friday after a disastrous opening nine holes of his second round.

The world No 1 withdrew after he covered the fearsome back nine at PGA National in seven over before heading angrily to the clubhouse.

He later said in a statement: “I sincerely apologise to the Honda Classic and PGA Tour for my sudden withdrawal.

“I have been suffering with a sore wisdom tooth, which is due to come out in the near future. It began bothering me again last night, so I relieved it with [painkiller] Advil.

“It was very painful again this morning, and I was simply unable to concentrate. It was really bothering me and had begun to affect my playing partners.”

He was playing in a group with Open champion Ernie Els and American Mark Wilson.

In a statement on pgatour.com, McIlroy added: “I came here with every intention of defending my Honda Classic title. Even though my results haven’t revealed it, I really felt like I was rounding a corner.

“This is one of my favourite tournaments of the year and I regret having to make the decision to withdraw, but it was one I had to make.”

The 23-year-old, who has struggled for form this season since making a much-publicised change of clubs, had shown encouraging signs in his opening round of 70.

But the defending champion’s second-round struggles began at the 11th – his second – when he narrowly avoided water with his approach and then flew a chip through the green.

After running up a double-bogey, he dropped another shot at 13 before finding water with a wayward drive at the 16th.

McIlroy took a penalty drop and then hit into another hazard as he carded an ugly triple-bogey seven.

His mood worsened further with a bogey at 17 before he dumped his approach to the 18th in the water, after which he called it day.

The new season, having signed a new equipment deal with Nike, has not gone well.

The Holywood man missed the cut in Abu Dhabi before exiting in the first round of the World Match Play last week. And now this.