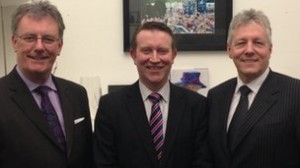 UNIONIST Unity candidate Nigel Lutton is refusing to do television or newspaper inteviews ahead of next week’s Mid-Ulster by election.

For the past three weeks, the News Letter has been trying to get an interview with the son of an RUC officer murdered by the IRA.

And despite attempts by the Newsletter to get the DUP and UUP to broker the situation, no interview has taken place with the newspaper.

The Newsletter’s political editor Sam McBride penned that it was impossible for his readers to understand what Mr Lutton stood for politically if he didn’t do an interview.

The situation took a turn for the worse on Thursday when Mr Lutton declined an invitation to take part in a television debate on the BBC’s discussion programme The View presented by Mark Carruthers.

The View had asked all the candidates to take part in a debate.

However, the unionist unity candidate, Nigel Lutton, declined the invitation. When told of this, Sinn Fein withdrew its candidate, Francie Molloy.

The remaining candidates, Patsy McGlone (SDLP) and Eric Bullick (Alliance), will be on Thursday’s show.

A Sinn Fein spokesman said Mr Molloy remained willing to take part in a debate involving all four candidates, but not if the unionist candidate – who is backed by the DUP, the UUP and the TUV – was not present.