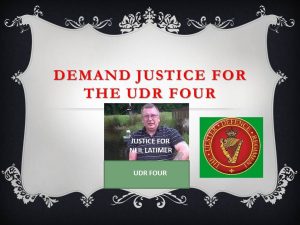 EXCLUSIVE: MEMBERS of the Royal Irish Regiment have pledged financial support to have the UDR4 case re-opened.

A fresh campaign has been launched to have the 30-year-old murder file re-examined after new evidence was unearthed.

Sources close to the case said a fighting fund had been set up in a bid to clear the name of Neil Latimer who was convicted of the murder of Catholic Adrian Carroll in Armagh in 1983.

“We believe Neil is innocent of the murder charge and a fighting fund has been established for those who want to make a financial donation towards getting his name cleared.

“Within the past few days, members of the Royal Irish Regiment have been in contact with us offering to make donations towards the fighting fund.

“This shows the depth of feeling within the Army about Neil’s conviction.”

Lawyers are currently working on the Latimer file and are considering drafting papers to mount a fresh appeal. 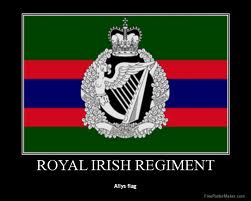 Supporters of the case have already started an online petition  – http://tinyurl.com/brs32um – to have the case looked at by the Historical Enquiries Team which investigates Trouble-related murders.

Belfast Daily first revealed earlier this month that a specialist team of investigators had unearthed new evidence which could help mount a fresh legal challenge to the murder conviction of UDR 4 soldier Neil Latimer.

Part of the new evidence is a transcript of a conversation between a female witness, who allegedly saw Neil Latimer carry out the shooting, and a relative of one of his co-accused.

James Hagan’s father recorded the call from the female, known as ‘Witness A’, on his private home line after receiving notice that she was going to call him. ‘Witness A’ was unaware the call was being recorded.

The phone call took place after the Court of Appeal quashed the murder convictions against Hagan, Noel Bell and Winston Allen in 1992.

However, the Court of Appeal upheld the murder conviction of Neil Latimer for shooting dead Adrian Carroll in Armagh.

Catholic Adrian Carroll was shot dead in 1983 and was the brother of the Sinn Fein councillor Tommy Carroll.

Neil Latimer served a total of 15 years in prison, including three years on remand, before being released.

Campaigners say he still maintains his innocence and could have been freed earlier but refused to admit his involvement in a murder he says he never committed.

During the phone call ‘Witness A’, whose testimony was crucial to prosecutors in securing Latimer’s conviction, told James Hagan’s dad that she was forced to give evidence by the RUC.

A source close to the case told Belfast Daily: “The transcript of the conversation between her and Hagan reveals that ‘Witness A’ tried to withdraw her statements against the UDR 4 but the trial judge ordered the police to have her produced in court within two hours.

“Instead, the detectives took her to the Mahon Road joint and police base in Portadown to debrief her.

“She says she was told that if the four UDR soldiers didn’t go down, the streets of Armagh would run red with blood.

“The police didn’t produce her until the Monday and it was on the basis of her witness statement that the four UDR soldiers were convicted. She told Hagan that she was coerced into giving evidence.”

Although ‘Witness A’ died four years ago, both the audio recording and a full transcript of the phone call conversation are still in existence.

Another piece of evidence which the trial judge refused to believe was the evidence of four workmen.

They told detectives that they overtook the UDR patrol jeep on the outskirts of Armagh on the day of the shooting.

The workmen said they heard the shots BEFORE the UDR patrol had even reached Armagh city.

A second female witness told detectives that she witnessed the shooting.

She described the gunman was 5ft 2ins tall, the same height as herself.

However, the trial judge refused to believe her saying she was mistaken as she was looking up a hill at the time the shooting took place.

The new evidence is to be handed over to solicitors who are currently studying all legal files on the case before mounting a fresh bid to have Latimer’s murder conviction quashed at an appeal hearing.

The UDR 4 case has been one of the most high profile cases in Northern Ireland history legal history.

In 1992, the Court of Appeal delivered a body blow to the credibility of the RUC by freeing three of the ‘UDR Four’ and suggesting that police officers involved in the case might be prosecuted.

The Northern Ireland Appeal Court in Belfast found that detectives had rewritten interview notes and lied to the original trial of four former members of the UDR who were jailed for life for the murder of Adrian Carroll.

Uproar broke out in court when the Lord Chief Justice of Northern Ireland, Sir Brian Hutton, announced that he and two other judges were turning down the appeal of one of the four, the alleged gunman Neil Latimer.

One of the judges, Lord Justice Murray, leapt to his feet as Latimer, then aged 30, climbed from the dock while calling: ‘Let me out of here, you don’t know what justice is.’

The court was adjourned as Latimer struggled with prison officers and police while relatives and campaigners shouted protests from the public gallery.

The case of the four had been referred for a second hearing at the Appeal Court after Esda (handwriting analysis) tests showed discrepancies in notes of interviews carried out by detectives at Belfast’s Castlereagh interrogation centre.

While Latimer remained in custody the other three men, Noel Bell, Winston Allen, and James Hagan, were released.

After their conviction was quashed, the trio said they were relieved to be free but saddened and disappointed at the Latimer verdict.

Supporters of the four men promised that they would continue their campaign to have Latimer freed.

His mother, Joan Latimer, said she was devastated by the verdict and that her son was very angry. Mr Bell’s mother, Margaret, said: ‘I don’t feel his name has been cleared. I just feel it’s not possible to clear the names of three and not all four.’

The campaign on behalf of the men had attracted support from a range of figures, including prominent Unionist politicians.

The campaign’s leader, Ian Paisley Jnr, said after the case that the decision to turn down Latimer’s appeal was ‘a complete and total gigantic error’.

He added: ‘They have tried to salvage something from a wreck and they have destroyed the life of a man.

“This is not justice. We have a conviction based on the fact that senior police officers lied. This is not how British justice should be meted out.”

Now with new evidence unearthed by specialist investigators, campaigners hope a fresh appeal can be mounted in the coming months.

“With the new evidence now unearthed, we believe there are fresh grounds to launch a further appeal and have Neil Latimer’s conviction quashed,” said a source close to the case.