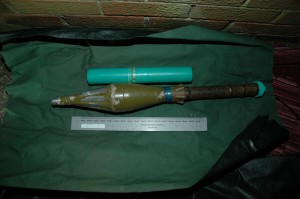 EXCLUSIVE: THIS is the warhead from a Russian-made rocket launcher anti-terrorist police seized in west Belfast following a surveillance operation.

And Belfast Daily can reveal that the warhead and RPG-7 launcher had been left in the empty house by a breakaway faction of the Continuity IRA (CIRA) ahead of a planned attack on the PSNI.

Republican sources said that the breakaway CIRA gang is headed up by a man from the Republic of Ireland.

“It is part of a consignment recently brought into the Republic,” said one republian source in west Belfast.

“We believe they have a few others stashed both in Belfast and Derry.”

Detectives from the PSNI’s Serious Crime Branch supported by a specialist Tactical Support Group (TSG) raided an unoccupied house in Hawthorn Street off the Springfield Road following a surveillance operation on the new CIRA gang.

The Police Federation praised Army technical officers for making safe the warhead and for police in finding the devices saying they had done a “superb” job in protecting life.

“There should be no hiding place for terrorists. A magnificent job by our brave colleagues.”

The PSNI said police in west Belfast attended a security alert in the Hawthorn Street area following the discovery of a suspect explosive device at a house.

It followed an investigation by police into dissident republican activity in west Belfast. 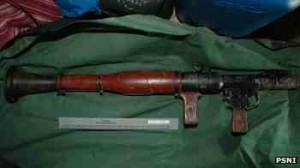 A PSNI spokesperson said: “These weapons systems are clearly intended to kill and we should be in no doubt that the recovery of these items has saved lives.”

Gardai believed the rocket launchers were destined for attacks in Northern Ireland.

The street had been closed and a number of evacuations of homes have taken place.

Army technical officers were tasked to the scene to examine the device.

The area was later re-opened and residents have been allowed to return to their homes.