Parades Commission chair calls for dialogue ahead of marching season

THE chair of the Parades Commission has called for dialogue between marchers and protestors to head off a feared summer of trouble.

But Parades Commission chairman Peter Osborne said people must choose not to have disruption on Northern Ireland’s streets this summer.

He said fears of a turbulent marching season are not inevitable, and called for increased dialogue to diffuse tensions following months of flag protests.

Violence has broken out in towns and cities across the region following some Union flag demonstrations, which began in December.

Police marshall over 2,000 parades during the marching season, the majority of which pass off without incident.

“People have a choice,” said Mr Osborne. “Recent events have demonstrated what happens when poor choices are made – there is disruption, disorder and rioting on our streets.

“Everyone has these choices in front of them, parading organisations, local communities, politicians and wider civic society.

Mr Osborne added that if people make “positive choices” he believe the commission would have less involvement in the marching season.

Last year community leaders and politicians worked together ahead of parades in contentious areas, such as Ardoyne. 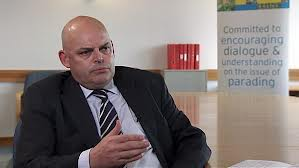 Mr Osborne said: “These public commitments created an expectation of progress and we hope that those who offered them will engage as we approach the summer.”

Organises which hope to hold a march in Northern Ireland must seek the permission of the Parades Commssion, but Mr Osborne said the commission does not need to be involved in the majority of the flag protests, because they are not parades.

“The law is very clear. It is an offence to organise or participate in a parade that has not been notified through the appropriate form to the police.

“In upholding the law, the police have a number of options open to them including stopping the parade and gathering evidence for potential prosecution,” he said.

The PSNI have set up ‘Operation Dulcet’ to investigate illegal parades and resulting violence.

Over 20o people have been arrested and police have identifie a further 200 for possible arrest.

And some 350 people officers have been injured during street disorder in east Belfast, Newtownabbey and Carrickfergus trying to quell violence.