TEEN BOY QUIZZED FOR HAVING GUN 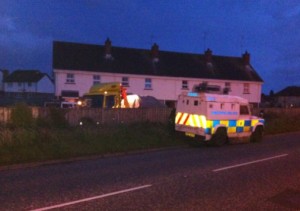 Police at the scene in Lurgan’s Bell’s Row Court

DETECTIVES arrested a teenage boy on Tuesday on suspicion of having a gun.

The 15-year-old was held after police searched a house in Bell’s Row Court in Lurgan, Co Armagh.

Following questioning, he has since been released on bail pending further enquiries.

Police said they returned later in the afternoon, accompanied by Power NI, to inspect the electricity supply due to suspicions it had been tampered with following the initial search.

There was disorder at the scene and a man is due to be interviewed by police.