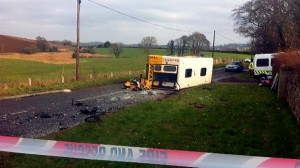 THE PSNI has launched an investigation after a bus carrying pupils to a special school overturned in Co Down.

Eleven children who attend Knockevin Special School were on board the bus, along with three adults at the time.

Firefighters at scene say children were well strapped in to seats which saved them from serious injury.

Education Minister John O’Dowd said he was “shocked” at the news.

It is believed a South Eastern Education and Library Board bus carrying the pupils and staff and a van collided on the Vianstown Road in Downpatrick on Tuesday morning.

One witness claimed the van struck the school bus which sent it careering onto its side.

A PSNI spokesperson said the pupils, some of whom have learning difficulties, were “extremely shaken” by the crash.

The shook up pupils were taken to a nearby house as they waited for paramedics and ambulance crew to race to the scene.the emergency services to arrive.

All of the passengers, including the driver, have been taken to hospital for treatment to their injuries, which are not believed to be serious.

The Vianstown Road has been closed and diversions are in place at its junction with Boncastle and Ballydugan Road.

Police crash investigators are now trying to establish the exact cause of the crash.

The school bus driver, staff on board the bus and the driver of the van will all be interviewed by police as part of the probe in an effort to piece together events leading up to the crash.

Speaking in the Assembly, Education Minister John O’Dowd said: “I am shocked to hear of this morning’s road traffic accident near Downpatrick involving a South Eastern Education and Library Board bus carrying pupils to Knockevin Special School.

“All pupils, their escort, the bus driver and the driver of the other vehicle have been taken to hospital and my thoughts are with them and their families following this distressing incident.

“I know the emergency services were promptly on the scene and I would like to thank them for their work this morning. I have asked to be kept informed of developments,” added the Minister.