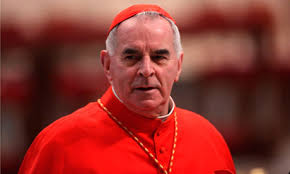 BREAKING NEWS…..CARDINAL Keith O’Brien, the most senior Catholic churchman in Britain, has resigned over allegations he acted “inappropriately”.

Cardinal O’Brien, who was born in Ballycastle, Co Antrim and is the head of the Catholic Church in Scotland, was due to retire next month.

According to The Observer newspaper on Sunday, three serving priests and a former priest made the claims against the 74-year-old of “inappropriate behaviour”.

Cardinal O’Brien denied the claims, which are believed to stretch back to the 1980s, and is taking legal advice.

It was reported that Cardinal O’Brien missed Sunday Mass at St Mary’s Cathedral in Edinburgh.

In the days before his resignation, the senior priest had called for the Catholic Church to end its celibacy rule. He has also spoken out against plans to legalise same sex marriage.

Cardinal O’Brien, who has been the Archbishop of St Andrews and Edinburgh since 1985, was the only British cleric eligible to vote in a successor to Pope Benedict XVI.