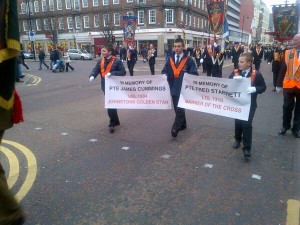 A MARCH has taken place to mark the 25th anniversary of the murder of two UDR soldiers in Belfast city centre by an IRA bomb.

James Cummings and Fred Starrett died when a 200lb remote-control booby-trap bomb detonated behind hoardings at Royal Avenue, as Castle Court was being built, on February 24, 1988.

Around 1,000 marchers left Templemore Avenue in east Belfast at around 10am on Saturday morning, passing St Matthews Chapel.

The parade has been organised by the Ulster Defenders of the Realm 710 Orange Order Lodge.

It is made up of former members of the UDR’s 7/10 ‘City of Belfast’ battalion.

It is being reported that some of the five bands could be heard playing the Sash.

The Parades Commission stipulated that no music should be played as bands passed places of worship and no paramilitary flags or paramilitary uniforms were to be worn.

Parade organisers had called for dignity for everyone involved in the event which culminated close to Castle Court.

Earlier parade organisers called for dignity for everyone involved.

Northern Ireland Secretary of State Theresa Villiers also appealed for calm ahead of the parade.

“I urge everyone to play their part in ensuring today’s parade passes peacefully,” she said.

“This is an occasion which should be commemorated in a respectful way, and the rule of law must be upheld.”

The families of Mr Cummings and Mr Starrett attended the commemorations where wreaths were laid.

The Orange lodges then paraded back to east Belfast by 12.30pm without incident.

The weekly flag loyalist flag protest is also due to take place outside police headquarters at Knock Road, in east Belfast, at 2pm after it was moved from City Hall.

Police have advised motorists to expect delays in the area and take an alternative route away from the protest.

Demonstrations have been taking place since last December when the council voted to stop flying the Union flag all year long.