To date, as a result of ‘Operation Dulcet’, the name given to the police probe, detectives have arrested 190 people from video footage and still photographers.

Now Chief Constable Matt Baggott has revealed that a further 200 have pinpointed from the images.

In an interview with the BBC’s political discussion programme, The View, Matt Baggott warned that investigation, headed up by Detective Supt Sean Wright, was far from over.

And he defended the police’s handling of the union flag protests.

However, he said the problem could not be “simply arrested away”.

“Our approach in the last two months has led to not a single serious injury and that is an achievement by itself,” he said.

“If we had been overzealous, if we had tried to arrest people off the streets in a very crude way… I think there could have been a much more serious problem that we would still be facing.

“We will first of all put the protection of life first, if we can enforce the law at the time we certainly will and people that chose to take part in illegal acts will have to face the consequences. 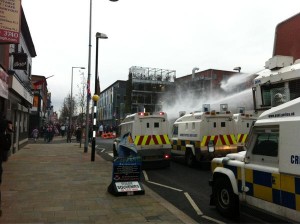 “But I think this is a time for quiet reflection and I do look to our civic leaders, our political leaders and particularly our church leaders to make the statements that are required for the law to be respected.”

A campaign of loyalist street protests has been taking place since December 3 when Belfast City Council voted by 29-21 to only fly the Union flag on designated days.

Mr Baggott said “significant heat” had been taken out of the protests compared to the “intensity of the rioting” in December and January.

A protest planned for Saturday is set to go to police headquarters in the Knock area of east Belfast. Mr Baggott said those taking part must act within the law.

“I hope that this Saturday will see a break from the illegal parades to a place where protest is peaceful and manageable,” he said.

“But I come back to the point that there will be consequences for people who choose to break the law.”

Loyalist protestors are changing tactics in their approach to organising street marchers.

Instead of announcing them on social media sites such Facebook and Twitter, they are not holding ‘lightning protests’ at short notice to catch police off guard.

During the same programme, a senior member of the Grand Orange Lodge of Ireland said they may not in the future apply or give notice to the Parades Commission for permission to hold parades.

Rev Mervyn Gibson told ‘The View’ that the Order is considering a new tactic – not filling in the notification forms for the PSNI in future, even though it is legally required to do so.

He said: “They will seek legal advice and that could be a possibility, yes.

“Simply because you fill in the form, you could get charged with an offence (under parading law). 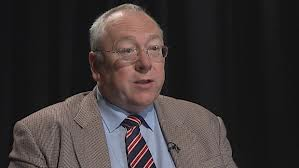 “You don’t fill in the form, you aren’t committing an offence other than you broke some other law.

“What would be the point of filling in a form if you could end up with a criminal conviction?”

A spokesperson for the Parades Commission said: “The law is very clear. It is an offence to organise or participate in a parade that has not been notified through the appropriate form to the police.”

“Where a parade is not so notified and is therefore breaking the law, it is a matter for the police to deal with under the various options open to them that could include stopping the parade or gathering evidence for potential prosecution.”

While police have insisted they cannot stop marches they have not been notified about, they do have the power to arrest those taking part in an unnotified march.

However, they have been reluctant to do so due to concerns around public safety and human rights legislation.

It has been assumed the Orange Order is more liable to prosecution than flag protestors as it is more obvious who is organising one of their marches, the district master for example.

Mr Gibson said that was one for the lawyers.

“That’s a point barristers are going to make a bit of money on over the coming summer,” he added.

Mr Gibson was asked if the Orange Order was prepared to exploit political stalemate and weakness in the system at a time when the government was seeking stability as it prepares to host the G8 summit.

He said: “We will do what we need to do to get our parades and our culture celebrated in a way which threatens no one.”

His comments come as a Short Strand resident prepares to challenge the Northern Ireland secretary of state and the PSNI over the handling of the flag protests, in the courts.

A judge has granted leave for a judicial review as the resident argues these parades are illegal and should be stopped.

A decision is not expected until April.