Anthony Thomas Friel pleaded guilty on Friday to possessing the explosive devices and component parts with intent to endanger life on 21 May last year.

A previous court heard how the bombs, bomb parts and other items were uncovered in a flat on Maureen Avenue in Derry after police stopped Friel’s taxi and found three sets of keys to the flat.

A police officer told the court in a failed bail hearing that she believed the flat was used for the storage and manufacture of the explosive devices, adding that it was devoid of the usual items one would find in a lived-in property such as a bed, food and other personal effects.

During the same raid, police also searched a nearby garage.

Officers found a Mark 16 mortar, launch tube and firing pack in the garage, along with other bomb-making items inside a filing cabinet. 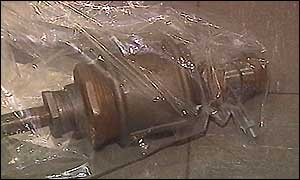 A mortar bomb found during searches of a garage

A Crown lawyer told the court at the time that police believed these items were of the kind used by the Real IRA on the security forces in recent weeks, whereas the Provisional IRA had not been active in these type of attacks in the area in the last eight years.

“Because of the material found at this man’s house the implication is that he is involved with the Real IRA,” the lawyer said.

A defence lawyer said the garage behind the terraced house as unlocked and could have been used by anyone to store the items.

He said that the mortar was not in a usable state.

His client had denied ever using the garage and there was no forensic evidence against him, the lawyer added.

Following his guilty pleas on Friday at Belfast Crown Court,, Friel was remanded back into custody.

Judge David McFarland said he would sentence him in April after the Easter vacation when pre-sentence probation reports had been compiled.