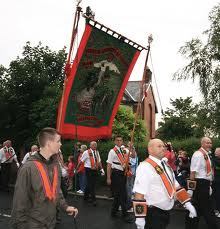 A UNION flag protest has been moved away from Belfast City Hall on Saturday to avoid it clashing with a UDR memorial parade.

The move by the Ulster People’s Forum says it has switched the venue to the PSNI’s Brooklyn headquarters at Knock in Belfast which is home to Chief Constable Matt Baggott.

DUP and UUP leaders Peter Robinson and Mike Nesbitt on Tuesday called on those behind the Union flag rally on Saturday to Belfast City Hall to postpone it.

They didn’t want it clashing with the UDR commemoration parade on the 25th anniversary of the IRA murder of two privates in Royal Avenue in Belfast City Centre.

The move comes despite discussions between the UPF and the organisers of the UDR memorial parade.

The organisers of the Ulster Defenders of the Realm 710 Orange Order Lodge memorial parade had told the UPF to hold its parade at Belfast City Hall as normal.

The meeting was held on Monday night at a secret location.

A source close to the discussions told Belfast Daily: “The organisers of UDR parade told the Union flag protestors to go ahead with their parade on Saturday.

“Basically for two reasons. Firstly, the times for the two parades don’t clash.

“And secondly they say that it is more than just a flag issue. Now its the entire system they are complaining about – government, political and legal.”

However, the UPF has now decided to switch their parade to PSNI headquarters in Belfast.

“It’s all about keeping the PSNI on their toes and stretching their resources,” said one loyalist source.

“There may be other lightning parades springing up without notice being given on social media.

“The plan from now is to spread news of a protest by word of mouth because the PSNI are monitoring social media networks.”

Saturday’s anniversary parade is being organised by the Ulster Defenders of the Realm 710 Orange Order Lodge.

It is made up of former soldiers who were members of the 7/10 UDR or ‘City of Belfast’ Battlion.

Privates James Cummings and Fred Starrett were killed on February 24, 1988 in an IRA bomb attack in Royal Avenue.

A 200 lb remote control bomb, hidden behind construction hoardings, was detonated the as the two UDR soldiers manned a security gate in Royal Avenue.

It is expected to arrive in Royal Avenue by 11 am for a short commemoration before the return leg starts at 11.45 am.

According to a Parades Commission determination, the parade will arrive back in east Belfast by 12.30pm.

Around 1,000 people will be taking part, along with five bands and 250 supporters.

The Commission determination said no provocative music is to be played as it passes St Matthews Parish Church and no paramilitary uniforms to be worn or paramilitary flags to be carried.