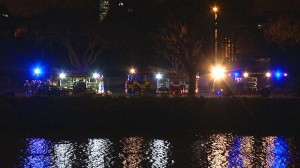 Fire crews at the scene of south Belfast car crash

POLICE investigating a south Belfast car crash in which two people were injured have arrested a man.

The 27-year-old is currently in custody helping police with their inquiries following the road smash.

The collision happened along the Annadale Embankment around 9.40 pm involving a black BMW and a red Volkswagen Golf.

Two men were taken to hospital with injuries but their injuries are not thought to be life threatening.

The road was closed for several hours but has since reopened.