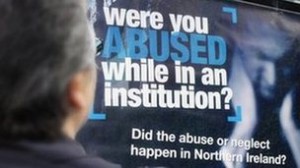 Poster campaign to be launched for Historical Abuse Inquiry

A POSTER campaign was launched on Thursday by the Historical Institutional Abuse Inquiry in an attempt to get more victims to come forward.

Three institutions run by Protestant churches or voluntary organisations will also be investigated.

The statutory inquiry was set up by the Northern Ireland Executive to investigate institutions run by the state and church and also those owned by the private sector or voluntary bodies from 1922 to 1995.

More than 175 people have so far contacted the inquiry to outline their experiences in care, with 89 interviewed to date.

A similar number are yet to be interviewed.

Allegations made so far have led to the light being shone on the 35 facilities.

To date the inquiry has identified more than 170 facilities that operated during the time period, including children’s homes, orphanages, industrial schools, workhouses, borstals, hospital units and schools for children with disabilities.

Pensioners in their 80s are among those who have outlined claims of childhood abuse to the inquiry.

As part of the inquiry to reach out to victims, advertising space on 80 bus shelters will be used in a bid to engage survivors.

Posters and literature will also be distributed to organisations in the UK and Ireland,

At the presentation in the Ramada Encore Hotel in Belfast’s St Anne’s Square, its chairman Sir Anthony Hart reviewed the inquiry’s work to date, and outlined his plans for its investigation work.

Sir Anthony will also outline details of the practical support that the inquiry is making available to witnesses.