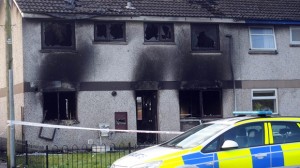 DETECTIVES have charged a man and a teenage girl have been charged over a series of attacks on homes in Antrim.

A 44-year-old man is accused of five offences including aggravated burglarly with intent to inflict grevious bodily harm and disorderly behaviour.

A 16-year-old girl was also charged with aggravated burglarly with intent to inflict grevious bodily harm.

They are due to appear before Coleraine Magistrates’ Court on Wednesday morning.

Three homes on the Greystone estate were damaged during a spate of attacks on Monday evening.

One homeowner described how a group carrying machetes and hammers tried to force their way into the property she shares with her four-year-old twins.

The gang smashed the kitchen and living room windows, before kicking the front door open at around 9pm on Monday.

They then ransacked the house, wrecking laptops and televisions and also stealing a mobile phone.

A 35-year-old man was assaulted and received injuries to his hand during the attacks.

Shortly after 10pm, a group of people tried to break into an upstairs flat nearby.

Just minutes later, a third property, believed to be empty, was deliberately set on fire.


One Response to TWO CHARGED OVER ANTRIM HOUSE ATTACKS