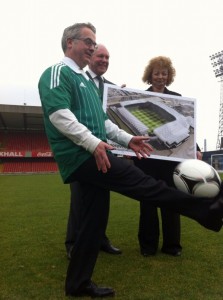 The SDLP MLA has given the green light for an 18,000 capacity stadium at the south Belfast ground.

It will mean new stands will be built at the East and South of the ground while refurbishment work will take place on the North and West stands.

It is the third of the stadium development programme in Northern Ireland that also includes Ravenhill and Casement Park.

Around £18 million is being spent on redeveloping the Ravenhill ground in east Belfast which is home to Ulster Rugby.

And around £76 million is being spent on upgrading the GAA’s Casement ground in west Belfast into a 40,000 seater stadium.

More than £25m of funding from the Department of Culture, Arts and Leisure is to go towards updating the historic football Windsor ground in south Belfast.

The Irish Football Association (IFA) is also set to locate its new headquarters there, moving from its current base in Windsor Avenue. 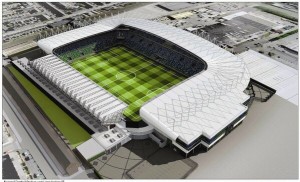 Construction work is scheduled to begin at Windsor Park in August with the phased project expected to be completed by the summer of 2015.

Meanwhile, discussions are under way about transforming the Boucher Road area of south Belfast into a sporting village.

A feasibility study has been carried out on behalf of Belfast City Council.

The idea is backed by the sports minister, environment minister and the Irish Football Association.

News of the discussions about a sporting village emerged on the day environment minister Alex Attwood granted planning permission for the redevelopment of WindsorPark football stadium in south Belfast.

Under the plan, the Irish Football Association will build an 18,000 seater stadium and two new spectator stands.

Mr Attwood said the granting of planning permission would lead to “the creation of a stadium that is fit for the 21st century”.

In total, the Stomont Executive has allocated up to £110m in public funding for the three building projects, through the Department of Culture, Arts and Leisure (DCAL).

More than £25m is to go towards the redevelopment of WindsorPark, the home venue for Northern Ireland’s international football team.

The green light was given for the project following the fastest ever turnaround for a major planning application in Northern Ireland.

Permission was granted 11 weeks after the application was received by the planning authorities.

Mr Attwood described it as a “tremendous boost for football and for sport”.

“This ambitious, exciting project is important in sporting terms to everyone in Northern Ireland and will also create employment opportunities for local people, particularly during the construction process.

“This is why I made sure that we were in a position to turn it around quickly.

“My officials worked with the project team and key consultees for months before the application was submitted, clearing any hurdles. This ensured a quality application and therefore a speedy process,” the minister added.

Sports Minister Carál Ní Chuilín described the planning approval as a key milestone in Northern Ireland’s stadium redevelopment programme and said it was a good example of cross-departmental co-operation at Stormont.

She said: “The Irish FA are now able to move to the next stage of their ambition to create a modern stadium to cater for the needs of the whole football community.

“While the modernisation of WindsorPark represents a huge boost for football fans, this project and the others at Ravenhill and Casement are also about building community foundations and providing a catalyst for the regeneration of the areas around the stadiums, ” Ms Ní Chuilín added.

“It is deeply regrettable that today’s match at Seaview was postponed.

A lot of work had gone on between the two clubs, fans representatives, local residents and the police in order to allow the match to go ahead in a peaceful atmosphere.

Unfortunately this afternoon’s events have disrupted this good work and spoiled what should have been simply a great top-of-the-table match for football supporters to enjoy. Football is the biggest loser today.

Our local Councillor Guy Spence was present on the ground, along with Councillor Lydia Patterson and other community representatives, trying to help keep the situation as calm and peaceful as possible. This was because of the previous history of difficulties caused by a small number of Cliftonville fans walking down Skegoneill Avenue behaving badly and offensively towards local residents.

There is video evidence of police acting aggressively towards Councillor Spence and of him being struck by police. Others who also tried to help have complained of police heavy handed tactics and needless aggression by TSG police officers.

We will be following these issues up with police urgently this evening and in the coming days.”

Councillor Spence added:
“I was present throughout the afternoon on the Shore Road in order to try to ensure that there was no trouble and that things would remain as calm as possible. When police were pushing people back I was struck by a police baton as I tried to lift a lady, who had fallen, back onto her feet. I was also struck by one police officer as I tried to speak to the police inspector after the arrest of a local community worker.”