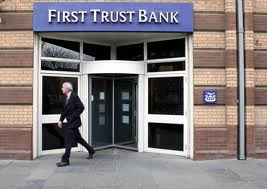 FIRST Trust bank has announced it is to shut six branches in Northern Ireland in the coming months.

Branches at the Cregagh Road in east Belfast, Ballyclare, Co Antrim, and Limavady, Co Derry will shut for the final time in May.

A further three in Larne, Co Antrim, Holywood, Co Down, and Fortwilliam in north Belfast will close in June.

Local comedian Jake O’Kane is less than pleased that his branch at Fortwilliam is being closed.

He tweeted: “If they’d been less greedy in property bubble this wouldn’t be happening.”

The closures are part of a cost cutting drive by the First Trust’s parent company, Allied Irish Banks.

Those axed were in Belleek, Ballycastle, Jordanstown, Dromore, in County Tyrone and Shipquay Street, in Derry/Londonderry.