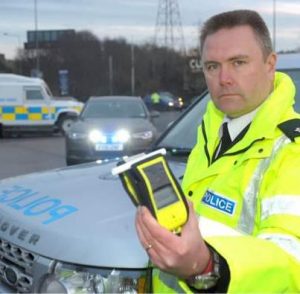 POLICE have revealed that there has been a sharp fall in the number of people caught driving under the influence of alcohol.

However, police said the 273 motorists were found to be drink driving faced 2013 with the prospect of losing their licence.

During the operation, police stopped over 4,000 drivers for preliminary breath tests.

Head of Operations Branch, Superintendent Mark Purdon said it was disappointing that so many still took the risk of killing or injuring themselves or others.

“These 273 people across Northern Ireland have begun 2013 with the prospect of going to court where they will almost certainly lose their driving licence,” he said.

“They should count themselves lucky. They could have lost their own life or destroyed the lives of others had police not stopped them.

“Our aim with this and every road safety initiative is to save lives and reduce injuries, which is why we ran operations day and night throughout the festive season and not just during the weekends or key dates.”

He continued: “While we welcome the fact that the vast majority of right thinking people realise that drink driving is shameful and unacceptable, clearly there is still an irresponsible minority who ignore all advice and warnings.”