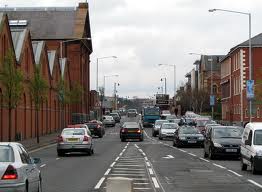 Ormeau the slowest road for traffic in the morning in Belfast

THE Ormeau Road has the slowest morning rush hour traffic in Belfast.

The figures were revealed after south Belfast SDLP MLA Conall McDevitt asked an Assembly question from the Department of Regional Development about peak time traffic in Greater Belfast.

The figures come from average speeds recorded in the Roads Service Journey Time Survey from 2011.

They were taken on 11 predetermined arterial routes and were detailed by Ulster Unionist Regional Development Minister Danny Kennedy.

During 7.30 to 9.15am the slowest average speed of 6.37mph was recorded inbound on the Ormeau Road.

This was followed by average speeds of just over 10mph inbound on the Newtownards Road and Falls Road.

Mr McDevitt, who regularly cycles to work, said that Mr Kennedy must do more to tackle congestion in Belfast.

He said the Minister should consider introducing further park and ride schemes in Newry, Warrenpoint, Craigavon, Ballynahinch and Downpatrick to help easy morning and evening congestion.

“The figures I relieved from the Minister in response to my question show that there is much to be done to reduce congestion across the city at peak times,” he said.

“Regular commuters will not be surprised to see that many journey speeds on arterial routes in and out of the city do not pass 10mph at peak times, but many have no other option, particularly those from rural areas, who are poorly served by public transport.

“The Department must promote access to the city, both for those with access to public transport and those without, as traffic speeds of 6.37mph are unacceptable.”

The MLA said he will be introducing a Private Members Bill to reduce the speed limit on urban residential roads to 20mph to encourage safer and consistent speeds.