CRUSADERS CALL FOR END TO FLAG PROTESTS OUTSIDE ITS GROUND 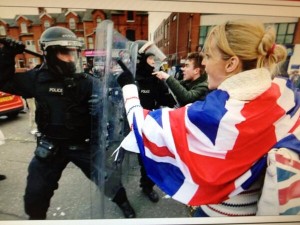 NORTH BELFAST football club Crusaders has called for an end to flag protests near its Seaview ground.

The game would have been a massive pay day for Crusaders in front of a packed crowd against is north Belfast rivals.

However, the derby was called off over a union flag protest outside the ground following safety advice from police.

Two men and a woman were charged in connection with the protest and released on police bail until March 13.

Local politicians accused the police of using “heavy handed tactics” during the protest.

DUP councillor Guy Spence said he was struck with a police baton.

However, local PSNI commander Chief Supt George Clarke defended the police handling of the situation, branding the scenes outside the ground as “utterly disgraceful”.

In a statement, Crusaders FC said its facilities were used by “the whole community” and that it did not want a repeat of the protest.

“It is a matter of great pride for our club that our membership, employees, volunteers, players and supporters come from all sections of the community,” it said.

“We are requesting that our members, supporters, local residents, community groups, schools, churches, politicians, sporting bodies, and all other interested parties use all their influence to put an end to flag protests in the environs of our stadium.”

The club said it had entered into “extensive dialogue” with residents from Skegoneill Avenue and others from November 2012.

It said residents had raised concerns in relation to Cliftonville fans travelling to games at Seaview, and a protest had been mooted, but that had been resolved in advance of the match and the planned protest had been “called off”.

Crusaders said it was its view that the cancelled game should be played at Seaview “at the earliest possible opportunity”.

It said it had the “support of Cliftonville FC and the wider football family in that regard”.

It also apologised “to any football supporters or local residents” who were inconvenienced on Saturday.

A small ‘white line’ protest was allowed to take place for about 40 minutes on Saturday afternoon.

Police moved it on to allow fans to get into the north Belfast ground.

The match was called off at 3.10pm because of safety concerns.

Most Cliftonville supporters and many Crusaders fans had been unable to gain access to the stadium.