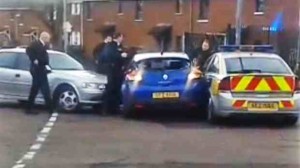 A MAN was remanded in custody on Monday on charges over a collision between a stolen car and a police vehicle at the weekend.

Patrick Anthony McGurk is accused of aggravated vehicle taking and dangerous driving over the crash in west Belfast on Sunday.

The 25-year-old, of Albert Street, off the Falls Road, is further charged with four counts of assault on police.

McGurk was arrested close to his home in the lower Falls area following the collision involving a Renault Mégane.

The vehicle had been reported stolen from the east of the city on Saturday night.

McGurk made no bail application during an appearance before Belfast Magistrates’ Court.

Footage of the alleged arrest has appeared on YouTube shortly after a blue Renault Megane was captured on video driving erratically in west Belfast.

Police in both unmarked and marked PSNI vehicles stopped the stolen car in a pincher movement, preventing those inside from escaping.

The footage also shows police at the scene coming under attack from missiles and a volley of verbal abuse.