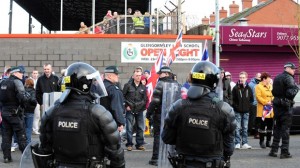 TWO men and a woman have been charged with public disorder over Saturday’s loyalist protest outside a football ground in north Belfast.

The charges come as local politicians accused the police of “needless aggression” and “heavy handed tactics” outside the stadium.

The eagerly awaited derby encounter in the Danske Bank Irish Premier League between second placed Crusaders against table toppers Cliftonville at the north Belfast venue on the Shore Road was postponed after fans could not enter the grounds safely.

Police say they tried to move a small group of protestors from a white line picket after 40 minutes to allow fans in the ground and were then attacked with bottles and other missiles.

PSNI had been involved in the planning of the match with both clubs and local residents groups for a number of weeks and it had been agreed to go ahead.

However, despite “intensive efforts by police and football officials to negotiate a peaceful outcome”, PSNI say both clubs advised that the game could not proceed due to disorder that broke out, in which three people were arrested.

The men, aged 48 and 47, and a 21-year-old woman are accused of disorderly behaviour and assault on police.

The 47-year-old is also charged with a provocative act.

They have been bailed to appear before Belfast Magistrates’ Court on 13 March.

“This is a regrettable outcome for the clubs, the many genuine fans who wanted to watch the match and indeed the wider North Belfast community,” a PSNI statement said.