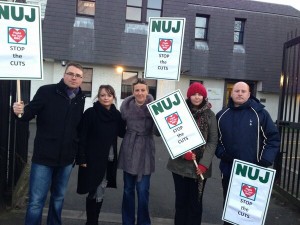 BBC journalists in Northern Ireland started a 24 hour strike at midnight on Sunday in a dispute over compulsory redundancies.

The strike, organised by the National Union of Journalists, has disrupted programming on Monday.

Members of the UK’s NUJ walked off the job at midnight on Sunday.

Picket lines were set up outside of BBC offices around the UK, including Broadcasting House at Ormeau Avenue in Belfast and the Foyle studio in Derry/Londonderry.

The union, which says jobs will be cut across the corporation, has asked the BBC for a six-month moratorium on all job cuts to allow for talks and negotiation.

The BBC said it was “too early” to speculate on possible disruptions to the broadcaster’s programming and expressed disappointment over the strike plans.

It said it understands how difficult layoffs can be and that it is working hard to ensure staff members are redeployed wherever possible.